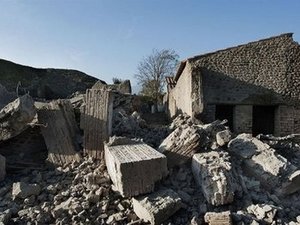 Italy's culture minister Tuesday announced a major new restoration project for the ancient Roman city of Pompeii, following international outrage over the collapse of a house and a wall at the site.

"In an archaeological area of this size, the urgency never goes away but the restoration starts tomorrow," Giancarlo Galan said at a news conference.

Galan's predecessor Sandro Bondi resigned earlier this year after a political furore over the upkeep of Italy's priceless cultural monuments.

Galan said the restoration would make use of laser scanners for 3D-mapping of the site and would involve ministry experts as well as the private sector.

"This is a national and international emergency of massive importance.... Gradual restoration is inevitable. Normal upkeep is not possible," he said.

Located near Naples in southern Italy, Pompeii was buried in ashes by the volcanic eruption of Mount Vesuvius in 79 AD. It is the most well preserved ancient Roman city in the world and a UNESCO World Heritage site.