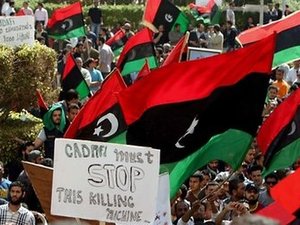 The German foreign ministry said Wednesday that five Libyan diplomats were being expelled because of "pressure" being exerted on Libyans living in Germany.

"The foreign ministry today (Wednesday) summoned the Libyan ambassador in Germany. He was informed that five Libyan diplomats have been expelled and have seven days to leave Germany," a statement said.

"The reason for the expulsion is pressure being exerted on Libyan citizens in Germany."

It gave no further details. Contacted by Agence France Presse, the foreign ministry was not available for comment.

Focus magazine reported this week that the diplomats had spied on dissidents living in Germany, and that federal police and the foreign and domestic intelligence services had discussed the case with Chancellor Angela Merkel.