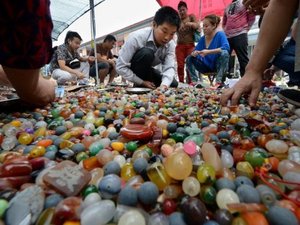 China's trade surplus widened to $26.7 billion in August as exports remained weak and imports registered a surprise fall, data showed Monday, adding to expectations of a new round of stimulus measures.

The weak trade figures highlight waning strength in the world's second-largest economy, which has struggled as a broader global slowdown and the European debt crisis drag on exports.

Exports increased 2.7 percent in August year-on-year to $178 billion, the General Administration of Customs said in a statement on its website. Imports fell 2.6 percent to $151.3 billion.

The increase in exports in August outpaced the one percent gain registered in July and was also slightly better than the 2.5 percent increase forecast in a survey of economists by Dow Jones Newswires.

The decline in imports, however, came as those economists had expected a 3.4 percent rise.

Gross domestic product in China, a key engine of global growth, grew 7.6 percent in the second quarter through June, its worst performance in three years.

The government is targeting full-year expansion of 7.5 percent this year, though that is well below the 9.3 percent recorded in 2011 and the 10.4 percent in 2010.

"With worsening growth outlook and muted inflation pressure, we expect the government to take more action to support growth," he said in a report.

Lu added that such efforts will likely focus on improvements to urban infrastructure and increasing the supply of land as well as two additional cuts by the central bank to reserve ratio requirements for banks and the easing of some curbs on lending.

China has already taken steps this year to stimulate growth by cutting interest rates twice in quick succession and slashing the amount of funds banks must keep in reserve as methods to stimulate lending.

The single digit growth in exports is in stark contrast to the government's goal of a gain of about 10 percent for 2012 made earlier this year.

For the first eight months of this year external shipments were up 7.1 percent from the same period in 2011, Monday's figures showed. Imports rose 5.1 percent.

The trade figures are the latest in a string of weak data that has confirmed a deepening slowdown in China's economy.

Production increased just 8.9 percent year-on-year -- the lowest result since a similar rise of 8.9 percent in the depths of the global economic crisis in May 2009.