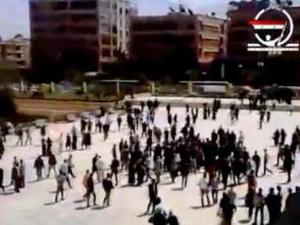 Meanwhile, thousands of women blocked a stretch of a main coastal road in the north of the country demanding authorities release hundreds of people arrested during a crackdown on the flashpoint towns of Banias and in Baida, London-based rights activist Rami Abdul Rahman told AFP by phone.

And the authorities paraded three suspects on state television, who admitted being members of an "armed terrorist gang, saying they received money and weapons from abroad to fuel unrest in Syria.

In particular, the suspects said they had received arms and weapons from neighboring Lebanon. Lebanese MP Jamal al-Jarrah, who was named by one suspect, denied any involvement.

One of them, Anas al-Kanj, was heard saying he was told "to incite people to protest, particularly outside the Ommayad Mosque in Damascus" and in the flashpoint protest towns of Daraa, Latakia and Banias.

The latest protests come after a deadly weekend of confrontations between security forces and growing protests, during which 30 civilians were killed, according to rights activists.

The government pledged to make some reforms but vowed to use its iron grip to contain the protests that have shaken Syria since March 15, and accuse "armed groups" of inciting the violence.

In Aleppo, 500 students demonstrated at the faculty of literature, and police made arrests after fist fights broke out between the two sides, said Radif Mustafa, president of the Kurdish Committee for Human Rights.

"The security forces clashed with the students and four students were arrested," Mustafa told AFP by telephone.

The students called for freedoms in Syria, where the ruling Baath Party has imposed crippling emergency law since it came to power in a coup in 1963 that allow it to ban public gatherings and make arbitrary arrests.

They also "expressed solidarity with the victims of Daraa and Banias", flashpoint protest towns in the south and north, respectively, said Mustafa.

In Damascus, some 50 students protested at the law faculty demanding greater freedoms, Abdul Karim Rihawi of the Syrian League for the Defense of Human Rights said, two days after a sit-in at the science faculty.

"Security forces used batons to disperse the students and some students were arrested," said Rihawi.

Monday's protest at the science faculty was a rare one for Damascus where students appear to have been emboldened by a deadly crackdown Friday, Saturday and Sunday.

The army has kept a stranglehold on the northern coastal city of Banias since Sunday, when regime agents opened fired on residents, including those in mosques, killing four people and wounding 17, according to witnesses.

The official SANA news agency had said nine soldiers, including two officers were killed on Sunday when their patrol was ambushed outside Banias.

In a clear sign of retribution, security forces on Tuesday locked down Banias and raked the nearby village of Baida with gunfire, witnesses said.

One witness said the gunfire was "intense like rain" while another said Banias was "surrounded by tanks" and "like a prison" with no one able to enter or leave the town.

A human rights activist told AFP the crackdown on Banias was "probably aimed at arresting" Anas al-Shuhri, one of the leaders of the pro-democracy protests.

President Bashar al-Assad has promised to launch reforms but his regime has put down the protests with deadly force, triggering international condemnation.

On Tuesday, the White House condemned the mounting crackdown on dissent in Syria saying the repression "is outrageous."