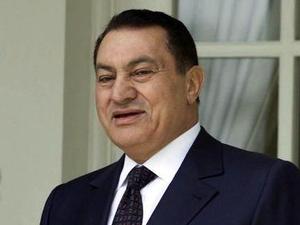 Hosni Mubarak, in hospital after a heart attack, and his two sons were placed under detention Wednesday in a probe into violence against protesters who brought about the ouster of the ex-Egyptian president.

A statement on the public prosecutor's Facebook page said chief prosecutor Abdel Magid Mahmoud authorized the detention for 15 days "as part of an inquiry into the use of force against protesters during the unrest in January and February."

Earlier Wednesday, the official MENA news agency said the 82-year-old Mubarak, in police custody in a Red Sea resort hospital, was in "unstable" condition and under observation.

Later in the day, the doctor tasked by prosecutors with assessing Mubarak's health said his condition had improved.

"The ex-president's state of health is stable after he received appropriate treatment," Doctor Ahmed al-Sebai said, adding that Mubarak's blood pressure had normalized after spiking.

Mubarak resigned on February 11 after 18 days of protests, with security forces believed to have killed hundreds of people in the first few days.

He was hospitalized in Sharm el-Sheikh on Tuesday, when he reportedly suffered a heart attack during questioning by prosecutors.

The state-owned daily Al-Ahram, citing sources in Sharm el-Sheikh, said on its website Mubarak had gone to hospital "under the pretext of being unwell in order to avoid facing questioning".

State television reported that Mubarak had refused to eat or drink since being told on Tuesday morning that he was to be questioned and was admitted by his bodyguards to the VIP wing of the Sharm el-Sheikh International Hospital.

MENA said security was beefed up in his hospital room and that he would be taken to a cell once his condition allowed his transfer.

However, Sebai said Mubarak's condition had not improved sufficiently for him to be moved.

The former leader's two sons, Gamal and Alaa, were transferred mid-morning to the Tora prison complex in Cairo, now home to other fallen officials and some of the country's most notorious political prisoners.

MENA said Gamal, once seen as his father's anointed heir, and his elder brother were handed white prison uniforms, blankets and mattresses after they surrendered their cell phones.

They turned down breakfast and appeared to be in shock.

They are accused of incitement to fire at demonstrators during the popular uprising that broke out on January 25. Nearly 800 people died during the uprising.

Earlier, state television said the brothers were being detained for 15 days "for the needs of the inquiry" and had first been interrogated in Sharm el-Sheikh.

Videos posted on YouTube showed what appeared to be dozens of protesters outside a court complex where the Mubarak brothers were being questioned.

The crowd demanded the two be taken to jail in a prison van, rather than a civilian car, and chanted: "The people demand the execution of the butcher."

The authenticity of the footage could not be immediately verified nor the exact location of the courthouse determined.

After the detentions, the youth group that spearheaded the protests that toppled Mubarak and has since pressed for his trial, said it would suspend a demonstration planned for Friday.

"This is a positive step, and we hope it is followed by the release of protesters arrested during the revolution and after," said Shadi Ghazali Harb, an organizer with the Youth of the January 25 Revolution group.

"We've suspended the planned protest for Friday; this was a main demand and the first step has been achieved," he said.

Mubarak's supporters, who have held occasional apologetic demonstrations since the president's ouster, announced on Facebook calls for a sit-in until his release.

They appealed to "all those who respect religion, law and human rights to save a man who spent 62 years of his life in service of the country."

Mahmoud ordered the inquiry on Sunday as part of a sweeping probe into corruption and abuse.

The Mubaraks were to be asked about allegations that they were "connected to the crimes of assault against protesters, leading to deaths and injuries", MENA said.

Prosecutors began questioning Mubarak senior and Gamal on Tuesday, Justice Minister Abdul Aziz al-Guindi said, adding that grilling over allegations of illegally acquiring wealth had not yet started "as that will be handled by the department of illicit gains."

The summons came after the broadcast of an audio tape in which Mubarak defended his reputation and after weeks of mounting protests calling for him to be tried.

After he resigned, Mubarak and his family moved to a residence in Sharm el-Sheikh. Although he is subject to a travel ban, his relative freedom has been a thorn in the side of the military rulers.