Palestinian Bid to Open Eco Accord 'Not Serious' 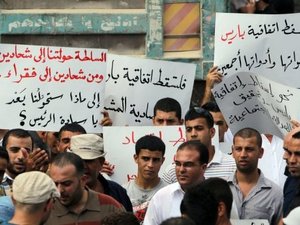 A Palestinian request for talks on amending the Paris Protocol governing economic ties with Israel in a bid to address social unrest in the West Bank is "not serious," an Israeli official said on Monday.

Palestinian civil affairs minister Hussein al-Sheikh told Agence France Presse on Sunday he had made a formal request to the Israeli government through the defence ministry for talks on changing the 1994 agreement.

But the official dismissed the move, saying the fact that the request, which he described as very general in nature, was submitted through the defence ministry, was "proof" it was "not serious" and only an attempt to deflect public anger over the spiralling cost of living.

"If they want to open the Paris Protocols, an international agreement, they should have submitted the request to the foreign ministry, or the finance ministry, or simply to the prime minister's office," the official said, speaking on condition of anonymity.

Instead, they sent the request to the defence ministry which is not authorised to discuss the issue. "It certainly has no authority to negotiate on the issue," he charged.

He also dismissed the request for talks about the agreement as overly general and not specific."

"It's not serious," he said, indicating that such an issue which should be discussed between heads of government.

The Palestinians were not really interested in reopening the accord and were only looking to shift the blame for their economic problems onto Israel, he said.

He said the Palestinians were not interested in reopening the Paris Protocols because that would require negotiations, "and at this stage they are totally unwilling to show they are negotiating with Israel."

For the Palestinians, "negotiations are normalisation, a prize for Israel, which hasn't frozen settlement activities and released all the prisoners," he said, referring to Palestinian conditions for resuming peace talks.