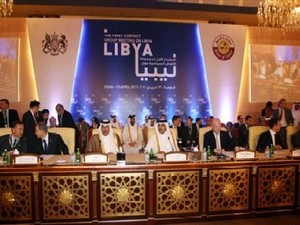 World powers offered cash to Libya's rebels and the means "to defend themselves" as they issued fresh demands for strongman Moammar Gadhafi to relinquish power, at a meeting in Doha on Wednesday.

In a final statement after the day-long gathering, the international contact group on Libya decided to set up a "temporary financial mechanism" to aid the rebels seeking to oust Gadhafi.

It "affirmed that Gadhafi's regime has lost all legitimacy and he should leave and allow the Libyan people to decide their future."

While there was a consensus that Gadhafi must go, differences emerged over arming the rebels.

The rebel leadership said in a Tweet: "We’re discussing weapons deals with countries that officially recognized the council, we’ve been getting positive replies."

The final statement from the meeting said "participants in the contact group agreed to continue to provide support to the opposition, including material support."

Qatari Prime Minister Hamad bin Jassem al-Thani told reporters this refers to "humanitarian means, and also means of defense. And that means that the Libyan people should get the means that they need to defend themselves."

But he seemed to acknowledge that this view was not universally held. He said "people gathered here have different interpretations," while reiterating that "the first thing that the Libyan people need is self-defense."

Italian Foreign Minister Franco Frattini said "either we make it possible for these people to defend themselves, or we withdraw from our obligation to support defending the population of Libya."

The U.N. resolution "does not prohibit supplying arms ... for self-defense," Frattini said.

Meanwhile, British Foreign Secretary William Hague said Britain had been providing non-lethal equipment to the rebels, and would continue to do so.

Belgium expressed opposition to arming the rebels, while Germany insisted that there could be "no military solution."

But Mahmoud Shammam, a spokesman for the rebels, indicated that the arms issue does not require consensus. "If needed, we will request (arms) from countries on a bilateral basis."

U.N. chief Ban Ki-moon urged the international community to "speak with one voice" on Libya, while warning that as many as 3.6 million people, or more than half of Libya's population, could need humanitarian assistance.

French Foreign Minister Alain Juppe told a press conference after the meeting that the contact group was eyeing a conditional ceasefire in the conflict.

"We want to achieve a ceasefire but on condition it's a real ceasefire under real control, not just a halt to firing," he said. Any ceasefire must comply with U.N. resolutions and entail the withdrawal of Gadhafi's forces from captured towns and a return to barracks.

Hague was upbeat about the meeting and said it would "strengthen" the pressure on Gadhafi to step down.

"It is impossible for anyone to see a viable future for Libya with Colonel Gadhafi in power," Hague told reporters. "Pressure for Gadhafi to go will increase at the meeting today. It will strengthen, not weaken."

Asked in an interview with Britain's ITV television, about NATO's actions, Hague said "if we hadn’t made this intervention, then clearly Gadhafi would have been able to take over the whole country again inflicting enormous bloodshed and tyranny as he went."

The final statement said the parties "agreed to set up a temporary financial mechanism to act as a means for the Transitional National Council and international community to manage aid revenues and secure short-term financial needs."

It gave no figures.

Shammam said "we will not use this money at all to buy weapons; it will be used for the basic needs of the Libyan people."

Members of the Transitional National Council addressed the contact group as an alternative voice for Libya's people.

In London on March 29, the TNC was not permitted to attend the plenary session of an international ministerial conference on the crisis, although its envoys held bilateral talks with several world powers on the sidelines.

"Civilians are not sufficiently protected," he said.

Essawi also said rebels were willing to hold talks with "any defector" from Gadhafi's regime, including former foreign minister Moussa Koussa, who Hague said was in Doha for contacts but not involved in the Doha meeting.

France said it will push NATO allies at a meeting on Thursday to contribute more warplanes to the bombing mission in Libya and speed up the air strikes.

Only six out of NATO's 28 members are conducting air strikes, while French and British warplanes are carrying out half the missions, the official said.

Ban painted a bleak picture of the impact of the fighting in Libya, which erupted when Gadhafi's forces began violently suppressing a popular uprising that began on February 15 against his four-decade iron-clad rule.

"Under our worst-case scenario, as many as 3.6 million people could eventually require humanitarian assistance" in Libya, which has a population of six million, Ban told delegates before the session went behind closed doors.

"The humanitarian situation continues to worsen," he said.

"Approximately 490,000 people -- almost half a million people -- have left the country since the crisis began," Ban said, quoting figures from the United Nations refugee agency UNHCR.

Britain and France, which had led global calls for action to stop Gadhafi's attacks on his own people, have pressed allies in NATO, which meets on Thursday and Friday in Berlin, to deploy more combat jets.

The Pentagon said on Wednesday that U.S. fighter jets were still carrying out bombing raids on Libya's air defenses.