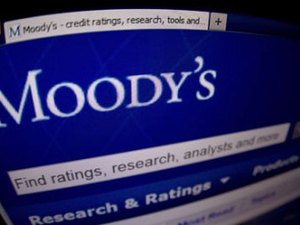 Moody's on Tuesday held its negative outlook for the British banking sector, citing the weak economy, higher regulatory costs and exposure to the Eurozone debt crisis.

"The outlook for the UK banking system remains negative," Moody's Investors Service said in a new report on the sector.

"The key drivers of the negative outlook are (1) the UK's uncertain economic prospects; (2) downside risks for asset-quality; and (3) pressure on profitability due to net interest margin pressure, weak credit growth, and higher regulatory and compliance costs."

The negative outlook means that the banking sector -- which faced a series of government bailouts at the height of the 2008 global financial crisis -- remains at risk of being downgraded in the future.

"These factors are partially offset by strengthened capital ratios, strong business franchises that are capable of generating strong underlying pre-provision earnings and the banks' progress in improving liquidity and reducing reliance on short-term funding."

The ratings agency repeated its view that the probability of government support for "systemically important institutions" would decline in the medium term.

It added that the sector faced "downside risks" from key markets in Britain and the Eurozone.

"Areas of downside risk for banks are their exposures to the UK commercial real-estate market and retail and corporate loan exposures in the European peripheral countries," it said.

"Despite efforts to reduce exposures, some banks still have significant concentrations in commercial real estate and in Moody's view, there is a risk of further defaults and higher provisions in this sector.

"In addition, although UK banks have limited exposure to sovereign debt from peripheral European countries, their other exposures (predominantly lower risk residential mortgages in Spain and Italy, and higher risk -- but well provisioned -- exposures in Ireland) could still be a source of further impairment charges."

Profitability is expected to be hit by British plans to force banks to ringfence their retail activities from investment operations.

Regulatory costs are also likely to increase as authorities crack down on a series of scandals linked to the mis-selling of financial products and alleged attempts by banks to rig interbank lending rates.

At the same time, Europe's major banks will also be forced to hold more cash as a buffer against future financial crises, under looming Basel III rules.