Finnish PM Says He is Not Pressing Spain to Seek Bailout 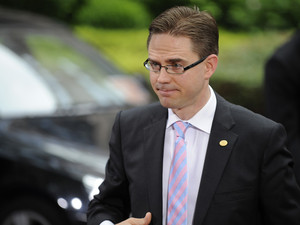 Finnish Prime Minister Jyrki Katainen Monday backed Spain in its "unfair" financial crisis and said he would not pressure it to seek a full sovereign bailout.

Katainen, addressing a Madrid economic forum before meeting with Prime Minister Mariano Rajoy, said he did not like to speculate about a Spanish bailout.

"I will not advise Prime Minister Rajoy on anything but I'm interested to hear his assessment of the situation and how we can move forward."

With expectations high that Spain will seek a full-blown bailout from Europe, Rajoy said on Monday that he would not accept any economic bailout that dictates spending cuts or touches old-age pensions.

Katainen, a strict defender of fiscal discipline who was a tough player in July negotiations for a Eurozone rescue loan to Spain's banking sector, said he would not dictate to Rajoy what areas to make cuts in.

"We all must concentrate on opportunities to avoid extra bailout packages and I think we can work so that the euro area can support countries to solve their own problems. We still have lots of opportunities," Katainen said.

Scrambling to rein in Spain's borrowing costs, Rajoy has announced tens of billions of savings measures including pay cuts and tax rises that have sparked mass street demonstrations.

"I fully agree the situation is unfair. Spain would deserve lower interest rates after doing so many austerity measures, " Katainen said.

"I believe very strongly that with the measures the government has done... the Spanish economy will be very competitive," he added. "It just takes some time."