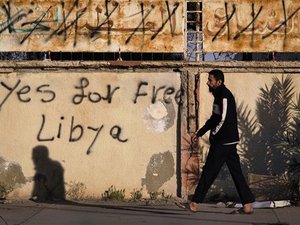 Libya's foreign minister expressed hopes for a "political solution" to end the two-month conflict in his country, his Cypriot counterpart said after the pair held talks on Thursday.

Abdelati Laabidi reiterated a "commitment to the initiative of the African Union and the wish for a political solution to be achieved," Cypriot Foreign Minister Marcos Kyprianou told reporters in Nicosia.

Laabidi, who flew into Cyprus on Wednesday, made the remarks as NATO was meeting to consider calls for intensifying air strikes against forces loyal to Libyan leader Moammar Gadhafi.

Rebels fighting to oust Gadhafi from power on Monday rejected a ceasefire proposal put forward by the African Union which would have halted the NATO bombing campaign.

Kyprianou said he had a "free and open exchange" during his one-hour meeting with Laabidi.

He added that he would brief European Union foreign policy Chief Catherine Ashton and his EU colleagues about his talks with Laabidi, who did not speak to the media.

"I conveyed to him the need for an immediate ceasefire from all sides and unarmed civilians must be protected and the relevant U.N. Security Council resolutions must be respected and fully implemented," said Kyprianou.

"We did discuss ideas, we put forward some suggestions on the table which the Libyan side will study accordingly... I think they will help but I can't mention the content until they are discussed."

Cyprus is an EU member and is also the host to two large British sovereign bases from which reconnaissance flights have been flown as part of the NATO-led air operation in Libya.

But President Demetris Christofias made clear last month that he opposed the use of the British bases for the enforcement of the U.N.-imposed no-fly zone, although he acknowledged that he had no authority to stop the former colonial power from exercising the sovereign rights it retained after independence.

A number of Greek Cypriot politicians, particularly from the leftist opposition EDEK party, have maintained good relations with Gadhafi's regime.

In the run-up to the Turkish invasion of the island's northern third in 1974, Libya was widely reported to have delivered weapons to the party's armed wing.