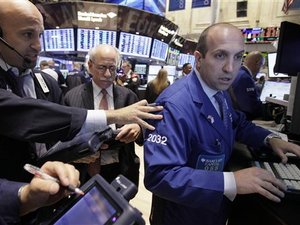 Moody's warned Tuesday it could strip the United States of its coveted triple-A credit rating if Congress fails to produce a budget that will bring down the federal debt burden.

"Budget negotiations during the 2013 Congressional legislative session will likely determine the direction of the U.S. government's Aaa rating and negative outlook," the ratings firm said in a statement

If the negotiations lead to specific policies that produce a stabilization and then downward trend in the ratio of federal debt to GDP over the medium term, the rating will likely be affirmed and the outlook returned to stable, it said.

"If those negotiations fail to produce such policies, however, Moody's would expect to lower the rating, probably to Aa1," the ratings agency said as it issued a new report, "Update of the Outlook for the U.S. Government Debt Rating."

The Moody's warning came less than two months before the November 6 election, with President Barack Obama fighting a close race for re-election against Republican foe Mitt Romney, and a congressional vote that could sway the balance of power between the parties.

Currently, Democrats dominate the Senate and Republicans control the House of Representatives.

Moody's said it was unlikely it would keep the Aaa rating with a negative outlook into 2014.

"The only scenario that would likely lead to its temporary maintenance would be if the method adopted to achieve debt stabilization involved a large, immediate fiscal shock -- such as would occur if the so-called 'fiscal cliff' actually materialized -- which could lead to instability," it said.

The fiscal cliff -- a mandated mixture of spending cuts and tax hikes -- is set to occur at the beginning of 2013, unless bitterly divided lawmakers can find a way to avoid it.

John Boehner, the Republican House speaker, said Tuesday it was unlikely a deal to avoid the fiscal cliff could be reached.

"I'm not confident at all," Boehner said in response to a reporter's question.

"The Senate at some point has to act. And on both of these, where is the president? Where's the leadership? Absent without leave."

Moody's said if the fiscal cliff happened, it would need evidence "that the economy could rebound from the shock before it would consider returning to a stable outlook."

"If the Congress remains divided, independently of the name of the president, one should expect another round of fierce partisan negotiations on all fiscal issues involved," she said.

Moody's said its rating outlook also assumes a relatively orderly process for the increase in the government's legal debt limit, which likely would be reached around the end of this year.

It said it would likely place the U.S. debt rating under review after the debt limit is reached but several weeks before the Treasury's resources are exhausted, noting it took a similar action during the summer of 2011's debt ceiling battle.

A year ago the United States, for the first time in its history, lost its triple-A rating as another ratings firm downgraded the nation after lawmakers remained in an impasse over fixing the fiscal deficit.

Standard & Poor's cut the rating one notch to AA+ in August 2011 and lowered its outlook to negative, citing the political deadlock over the deficit.

In June, S&P maintained that action, warning that the reasons for the downgrade remained in place and that if anything they were deteriorating.