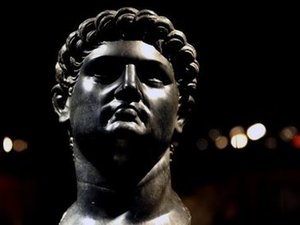 It's safe to say that the Emperor Nero -- the subject of a major new exhibition and archaeology trail that opened in the Roman Forum this week -- has always had something of an image problem.

He has gone down in the history books as the man who had his domineering mother Agrippina killed, kicked his pregnant wife Poppaea to death and -- as legend would have it -- played his lyre on a hill while Rome burnt below him.

The new exhibit "Nero", which runs until September 18, sets out to show that the murderous emperor was not all bad and was also a lavish patron of the arts and an innovative urban planner who re-fashioned large parts of ancient Rome.

"It's not an attempt at rehabilitating Nero. It helps to explain his merits, his qualities but also his failings, to give a fuller image," Italy's junior culture minister Francesco Maria Giro told reporters on a tour of the show.

"He was a man full of lights and shadows," Giro said, adding: "The exhibition is set out across the area where Nero conducted his public and private life," including the Roman Forum, the Palatine Hill and his Domus Aurea palace.

Nero became emperor at just 17 in 54 AD thanks to his mother and met his end in 68 AD after his legions and the Roman Senate rebelled against him. He fled Rome and stabbed himself in the throat before he could be arrested.

The victims of his rule included not only his mother and two wives, but also his rival Britannicus and his philosophical mentor Seneca who was accused of plotting to assassinate Nero and was ordered by the emperor to kill himself.

The characters of a life that reads like a cross between a horror film and a soap opera come to life in the exhibition, which begins with busts and portraits of Nero, Agrippina and Poppaea in the Roman Curia in the Forum.

The flavor of emperor's decadent rule is re-created with showings of the cult 1951 film "Quo Vadis?" starring Peter Ustinov as Nero projected inside the Temple of Romulus -- now the church of Saints Cosma and Damiano.

But the centerpiece of the trail is Nero's vast palace complex, the Domus Aurea, which was never completed and was destroyed by a fire after his death.

The palace "was an extremely complex structure" which occupied a vast chunk of ancient Rome, Rossella Rea, director of the Colosseum museum, told Agence France Presse.

"It was a complex of various palaces set in a very green landscape and rich in aquatic imagery. We have to remember that the place where the Flavian emperors had the Colosseum built was a large artificial lake," Rea said.

Even the name Colosseum comes from a "colossal" 35-meter high statue of the Sun God with Nero's features that stood on the site.

Visitors can also see for the first time the famous "Cenatio Rotunda" -- a revolving dining room in the palace complex that was discovered in 2009.

But access to the interior of the Domus Aurea itself is barred as the structure has been severely weakened by water leakage and is being restored.

Rea's tip for visitors is to leave plenty of time for the exhibition, spread across eight locations. The average time to complete the tour? Three hours.