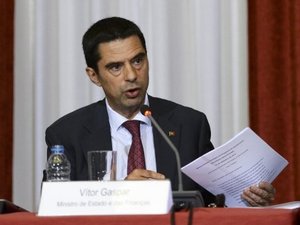 Bailed out Portugal won a precious reprieve from its creditors Tuesday, a day before a crucial court decision in Germany that could bring a painful end to a summertime lull in the eurozone debt crisis.

The EU and IMF agreed to relax Portugal's deficit targets for 2012 and 2013, rewarding the Portuguese for pushing through reforms and drawing a marked contrast with the little patience shown by creditors to Greece.

"This revised path will allow the (Lisbon) government to design and implement structurally sound fiscal measures, while easing the short-term economic and social cost of fiscal adjustment," the troika mission said in a statement.

In neighboring Spain meanwhile, the Eurozone’s fourth biggest economy and a crisis flashpoint, the government still refused to say whether it would seek a full EU bailout, as well over a million people swamped Barcelona demanding independence for Catalonia.

But as with all players in the more than two-year-old debt crisis, Spain's focus remains on the Wednesday decision by the German Constitutional Court, widely seen as a crunch moment for the Eurozone.

On the eve of the main ruling, the Karlsruhe-based court had already rejected a last-minute legal challenge. It said it would continue with its decision on whether German President Joachim Gauck can sign into law the European Stability Mechanism (ESM) and the European fiscal pact.

Also on Wednesday the Dutch go to the polls with an anti-austerity party set to make big gains; and EU leaders are to unveil plans for the first step in creating a Eurozone banking union.

A decision by the court to block Germany's participation in the 500-billion-euro ESM bailout fund and the pact obliging countries to cut their deficits would negate the strategy elaborated by European leaders to overcome the debt crisis.

It could lead to a new spike in market tensions eased last week by the European Central Bank's decision to launch a new bond-buying program.

The last-minute complaint to Germany's Constitutional Court had argued that the ECB's new bond-buying program was an illegal monetarisation of debts.

But on Tuesday, ECB official Joerg Asmussen, a former German deputy finance minister, defended the new policy saying the central bank was in its role as monetary "stability guardians and crisis managers."

"Responding to the sudden financial tensions, central banks crisis measures have contributed to calming and avoiding highly detrimental feedback loops between financial markets and the real economy," Asmussen said in a speech.

In Spain, a thousand buses from across the northeastern Spanish region of Catalonia carried supporters to Barcelona for the region's national day, or Diada, with a slogan: "Catalonia, a new European state."

"There are 1.5 million people and everything has gone peacefully," said a police spokesman.

A human sea flooded the city, as Catalans waved red-and-yellow striped flags, many accusing Spain of dragging them into economic trouble.

Catalonia, whose economy is bigger than Portugal's, accounts for a fifth of Spanish output. It wants the power to raise and spend its own taxes like the neighboring Basque Country.

Fiercely proud of their distinct language and culture, Catalans increasingly feel they are getting a raw deal from Madrid.

The central government in Madrid, which is trying to squeeze the country's overall deficit back into EU limits, has demanded regions make huge cuts to public services.

On a visit to Madrid, Finnish Prime Minister Jyrki Katainen backed Spain in its "unfair" financial crisis and said he would not pressure it to seek a full sovereign bailout.

With expectations high that Spain will seek a bailout from Europe, Spanish Prime Minister Rajoy said on Monday that he would not accept a rescue that dictated spending cuts or touched old-age pensions.

Katainen, a strict defender of fiscal discipline who was a tough player in July negotiations for a Eurozone rescue loan to Spain's banking sector, said he would not dictate to Rajoy what areas to make cuts in.

German Finance Minister Wolfgang Schaeuble hailed "substantial progress" made by Greece in cutting its debt mountain, in a speech to German lawmakers.

But he urged Athens to stick to its promises if it wanted to receive much-needed fresh aid.