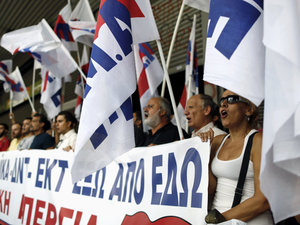 A barrage of strikes hit Greece on Wednesday as the government struggled to finalize a new austerity package with international creditors and sought to jumpstart a privatization drive delayed for months.

Teachers, hospital doctors and municipal staff kicked off separate protests against planned cutbacks and job losses as civil servants and security staff prepared to demonstrate later in the day.

Prime Minister Antonis Samaras has called his coalition partners to a 1630 GMT meeting with time running out for Athens to finalize about 11.5 billion euros ($14.7 billion) in cuts in 2013-14 to unblock access to EU-IMF loans.

News reports on Wednesday said that the government was under intense pressure from its so-called 'troika' of creditors -- the EU, IMF and the European Central Bank -- to cut pensions and severance pay and revise working hours.

Samaras has struggled to convince creditors that his government is determined to push forward with reforms which are months behind schedule, but the demands for further action have strained the three-party coalition.

Athens must wrap the cuts package up by Friday if it is to present the plan to Eurozone partners meeting in Cyprus.

On Tuesday, the state privatization fund announced that several projects had moved a step forward for the first time since May.

The Hellenic asset development fund said it had shortlisted property developers from Israel, Greece, Britain and Qatar for the sale of up to 70 percent of shares in the capital's former airport of Hellenikon, one of the Greece's foremost real estate assets.

Another six investors, including companies from Britain and Russia, had been vetted for the development of land on the tourist islands of Rhodes and Corfu.

The government recently replaced the head of the privatization fund after the agency concluded four privatizations worth 1.8 billion euros ($2.3 billion), compared to an overall five-year target of 28 projects worth 19 billion euros.

The 'troika' report, expected in October, will determine whether Greece will be able to receive a much-needed 31-billion-euro installment from its 130-billion-euro EU-IMF rescue package.

The cuts are reported to include slashing pensions by 3.5 billion euros, health cuts worth 1.47 billion euros as well as a 517-million-euro reduction in defense spending.