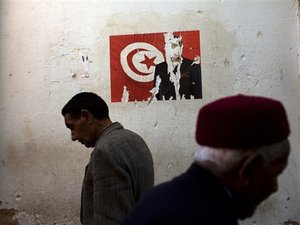 "The accusations include murder, conspiracy against the security of the state as well as trafficking and the use of drugs," Lazhar Karoui Chebbi said in an interview with national television late Wednesday.

It is the first time that authorities have given a full tally of the charges that Ben Ali will face if he is extradited to the country that he ruled with an iron fist for 23 years.

The government had previously confirmed that he was wanted for murder and incitement.

Ben Ali has been accused of ordering security forces to crack down on about a month of protests that led to his ouster during which around 200 people were killed, according to U.N. figures.

Chebbi said Tunisia's transitional government was compiling a file to support its demand for the extradition of the former president, who fled to Saudi Arabia with his family on January 14.

A justice ministry delegation will go to the Interpol headquarters in Lyon, France, to try to accelerate the process of executing the arrest warrants, the minister said.

Officials had also met with delegations from Canada, Switzerland and the United States, which were involved either because members of the Ben Ali family were on their soil or over fraudulently obtained goods.

Tunisia has already asked Ottawa to extradite and freeze the accounts of Ben Ali's wealthy brother-in-law Belhassen Trabelsi, who reportedly flew on a private jet to Montreal on January 20 with his wife and children.

Tunisian authorities have arrested 33 members of Ben Ali's family on suspicion of plundering the nation's resources.