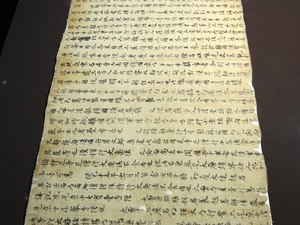 France Thursday sent back a shipment of ancient Korean royal books, 145 years after its troops looted them during a retaliatory raid on an island west of Seoul.

Two containers carrying 75 volumes of "Uigue", illustrated manuals on royal protocol written during the Chosun Dynasty (1392-1910), arrived at Incheon airport after being released by the National Library of France.

The books will be housed at South Korea's national museum. Technically they are on lease for a five-year permanently renewable term but Seoul officials say France is unlikely to try to reclaim them.

The remaining 221 volumes will be delivered by the end of next month, the culture ministry said.

The return of the books became the subject of intense diplomatic wrangling after a South Korean historian working at the National Library of France stumbled upon them in 1975.

One volume was returned in 1993 when then-President Francois Mitterrand visited Seoul. France was pushing hard to secure a multi-billion-dollar high-speed train project at the time.

Current President Nicolas Sarkozy agreed last November to return the other volumes when he met President Lee Myung-Bak on the sidelines of the Group of 20 summit in Seoul.

The books were taken by French troops in 1866 when they invaded Ganghwa island in retaliation for the Chosun dynasty's execution of French Catholic missionaries.

Seoul had long sought to retrieve the books, which set out the protocols for royal ceremonies and rituals with colorful illustrations.

Culture Minister Choung Byoung-Gug described the books as "a proud part of our cultural heritage" and said their return has "deepened trust and friendship" between the two countries.

The national museum will stage a special exhibition of the books from July 19 through September 18.

The foreign ministry said the return would "accelerate future-oriented friendly relations" between South Korea and France.