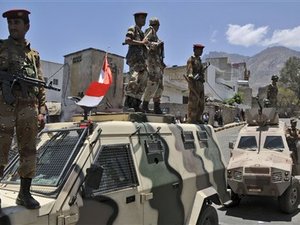 Yemenis are preparing for rival demonstrations following the weekly Friday prayers after anti-regime protesters rejected any solution that does not see President Ali Abdullah Saleh out of office.

Anti-Saleh protesters are calling for the "Friday of Determination" while his loyalists have dubbed it a "Friday of Dialogue."

Yemen's oil-rich Arab neighbors in the Gulf have urged Saleh, in power since 1978, to ensure a peaceful transition of power to Vice President Abdrabuh Mansur Hadi and a national unity government led by the opposition.

But protesters have rejected the proposal, demanding that Saleh's entire regime be dismantled and he be prosecuted.

Saleh, for his part, has accepted in principle the initiative of the six-nation Gulf Cooperation Council but without spelling out clearly whether or when he would step down.

He has so far insisted on overseeing any transition, fearful of being dumped out of office and faced with prosecution like his ally, Egypt's president Hosni Mubarak.

Opposition groups in parliament have remained reserved, apparently fearful of the reaction of protesters on the streets whose ranks have suffered more than 125 deaths in clashes with Saleh's security forces.

Massive rival demonstrations have been taking place every Friday for months, a declared U.S. ally in Washington's fight against al-Qaida, which has a strong presence in Yemen's south and east.

The weekly protests have turned deadly at times. In a Friday bloodbath on March 18, 52 people were gunned down in what rights groups have called "an apparently coordinated sniper attack on a protest camp in Sanaa."