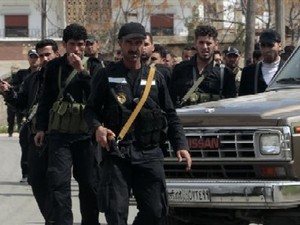 Snipers shot dead a soldier and wounded another in Syria's flashpoint city of Banias Thursday, state news agency SANA said, a day after a deal was struck for the army to restore order there.

The killing comes nearly a month after nationwide protests broke out calling for greater freedom, political reform and the lifting of a draconian emergency law, which have been harshly suppressed by security forces.

It also comes amid claims that several people freed after detention in Banias alleged they were tortured.

"A group of snipers opened fire on soldiers as they were on patrol in Banias," SANA said. "One soldier was killed and another wounded by this criminal gang," it added, without identifying the attackers.

Earlier Thursday, London-based Syrian rights activist Rami Abdel Rahman said "there was a deal on Wednesday between Syrian officials and city residents for the army to enter Banias imminently to restore order."

"Security agents will refrain from patrolling neighborhoods to make arrests, and the hundreds of people arrested in Banias will be released," Abdel Rahman, head of the Syrian Observatory for Human Rights (SOHR), told AFP by telephone.

"Elements of armed gangs," some of whom he said were close to security and intelligence services and "have caused unrest in order to create dissension, will be prosecuted", he said.

And "security officers who failed to stop the unrest and brought Banias to the brink of a confessional war will be punished too," Abdel Rahman said.

Banias is a Mediterranean port city home to Sunnis and Alawite Muslims, as well as Christians.

Security forces have encircled Banias, 280 kilometers (175 miles) northwest of Damascus, since deadly clashes there on Sunday.

Government forces killed at least four people and wounded 17 when they strafed a residential area of the town with gunfire for hours, witnesses said.

And nine soldiers were later killed when their patrol was ambushed outside the town, the official SANA news agency said.

Scores of people were also wounded in the unrest and hundreds reportedly arrested in Banias and the nearby village of Baida.

And the official SANA news agency said several people, including a soldier, three rebels and an undetermined number of "innocent civilians," were killed in Banias on Tuesday.

More than 5,000 women gathered on the coastal road between Tartus and Banias Wednesday to demand the release of those arrested.

The London-based SOHR said in a statement that hundreds of those arrested had been released on Wednesday night and Thursday morning.

"The SOHR denounces in the strongest possible terms the fact that the people of Banias have been subject to hideous acts of torture."

It called for the appointment of an independent commission composed of lawyers "to hear evidence in cases of torture and to bring the perpetrators to justice."

The law imposes restrictions on public gatherings and movements, authorizes the detention and interrogation of any individual, as well as the surveillance of personal communications and media censorship.

Reliable casualty figures are impossible to obtain in Syria, but Human Rights Watch said on Tuesday that at least 130 people had been killed up until then.

Officials have put the death toll at closer to 30 and blamed the violence on armed groups and foreigners seeking to divide the ethnically and religiously diverse country.

In other developments, Sweden, Denmark and Norway all advised their citizens on Thursday not to travel to Syria.

Denmark also said it would halt all deportations of Syrians who have been denied asylum back to Syria because of the security situation.