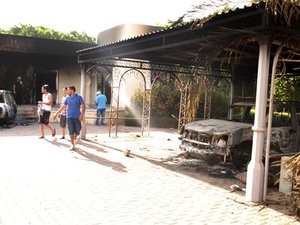 Libyan security guards were killed and wounded trying to defend U.S. ambassador Chris Stevens during the attack in Benghazi in which the U.S. diplomat died, a Libyan U.N. envoy said Wednesday.

Ibrahim Dabbashi, Libya's deputy U.N. ambassador, told reporters that up to 10 Libyan security personnel were casualties of the attack on Tuesday. "Some of them have been killed at the start of the attack," he said.

Stevens was among four U.S. diplomats killed in Benghazi by a mob who stormed the U.S. consulate after allegedly being angered by a movie mocking Islam.

"Heavily armed militants assaulted the compound and set fire to our buildings. American and Libyan security personnel battled the attackers together," Clinton said in Washington.

Dabbashi said he did not have an exact number for the Libyan guards who were hit. He paid an emotional tribute to Stevens, who was sent to Libya as opposition forces battled former dictator Moammar Gadhafi.

"The ambassador was a friend of Libya. He was always shoulder-to-shoulder with us when we had to face murder and destruction during the reign of the despot," the Libyan envoy said.

Hogwash! Report from one injured guard said there were 7 total guards on the perimeter - 4 rentaguards from the british contractor and 3 members of Libya’s 17th of February Brigade,

Hillary, you approved the Rules of Engagement, you are responsible