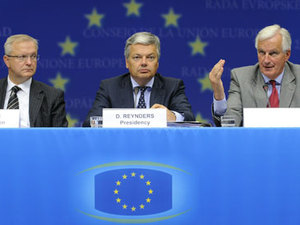 EU finance ministers can afford a more relaxed approach at meetings this weekend in Cyprus as the bloc puts in place the key elements needed to ease the crippling three-year eurozone debt crisis.

The two-day informal talks in Cyprus follow a major breakthrough Wednesday when Germany's top court cleared the way for German ratification of the European Stability Mechanism (ESM) and a fiscal pact tightening up the rules.

With the 500-billion-euro ESM set to roll and the European Central Bank on standby to intervene on the markets, the EU's crisis fighting machinery finally seems to have what it takes to keep the markets at bay.

After months of bad news and anguish over the future, the ministers, joined by their non-euro European Union counterparts, senior EU officials and central bank governors, should now be able to catch their breath in Nicosia.

Issues that only recently looked as if they could undo the eurozone project no longer seem quite so urgent as the pressure comes off Spain and Italy, once tipped as likely bailout candidates to follow Greece, Ireland and Portugal.

On the agenda, Greece's belaboured progress on its second rescue package is likely to be left to a formal meeting of eurozone finance ministers in October -- probably a full summit, in fact -- after creditors report back on the current state of play.

Fresh protests on Wednesday were nowhere near the size of an anti-austerity, pro-independence march in Catalonia the day before, and despite these internal tensions, the feeling on markets is that Spain, which has sought up to 100 billion euros ($128 billion) to aid its stricken banks, seems to have more breathing room now.

Spanish Prime Minister Mariano Rajoy said Wednesday he would wait to see if the country's borrowing costs continue to fall after the German court ruling.

"I still don't know the conditions (for a full bailout) nor whether it is necessary for Spain to request it," Rajoy said.

Portugal is struggling to meet its rescue package targets given the adverse economic climate but exports are up even if the tax take is down, as the country improves its competitive position.

For Ireland, the question revolves around one main issue, whether it can get help from the ESM for its banks so as to reduce the massive debt it took on when bailing out its banking system.

Newcomer Slovenia is also struggling but no request for aid is expected in the immediate future, Eurogroup head Jean-Claude Juncker said last week after talks in Luxembourg with the head of government;

Host Cyprus, currently holding the EU's rotating national presidency, however may make for some awkward moments given its stated need for help.

"What we need is a substantial request" for aid, one senior EU official said of relations with Nicosia.

Cyprus asked for EU help formally the same day that Spain requested aid for its banks in June but the issue has hung fire after the country also sought assistance from Russia, with whom it has close business links.

"To my mind, it's a question of timing, of political appreciation," the official said of the likely next move by Cyprus, which has a president with a Communist past and a large and wealthy Russian emigre population.

Ministers on Saturday will also discuss European Commission proposals for a single European bank supervisory regime, outlined Wednesday as part of wider bloc reforms, including the ESM, designed to tame the debt crisis once and for all.