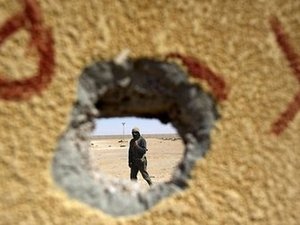 At least 13 people were killed and some 50 wounded Thursday in an attack by Moammar Gadhafi's forces on the port area of Libya's third city Misrata, a rebel spokesman said.

"At least 13 people died, including women and children and four Egyptians who had attempted to be evacuated from the port," the spokesman said on condition of anonymity.

"We have faced since dawn a cowardly and criminal attack on the area of the port and the district of Kasr Ahmed near the port," he said, adding that pro-Gadhafi forces fired dozens of Grad missiles and tank shells.

"The toll will obviously worsen. We are still searching for other victims under the debris of houses," the spokesman said.

The pro-Gadhafi troops stopped their attacks in the area in the afternoon, but continued to fire on other districts including Saragsa and Al-Ghiran, he said, adding: "We need help."

Libya's government said Wednesday that Misrata's port area, the only access point the rebels have with the outside world, was a "danger zone" and that any boat wishing to reach it would have to have prior authorization.

Misrata's insurgents, which are "well organized" according to the regime, have withstood a siege and bombardment by Gadhafi's forces for nearly two months.

On Wednesday, Libyan Deputy Foreign Minister Khaled Kaim said elements of the powerful Lebanese party Hizbullah were fighting alongside insurgents in the city.

"The snipers in Misrata are elements of Hizbullah. This is not an anecdote, it's real," he declared, adding that Western intelligence agencies were aware of Hizbullah activity in Misrata.