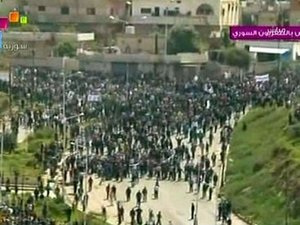 Syria denied on Thursday a claim by the United States that Iran was helping it to crack down on demonstrations for more freedom and political reforms that have left more than 100 people dead.

The Syrian foreign ministry denied as "totally false" the U.S. charge, challenging the U.S. State Department to publish any evidence in that regard, Syria's state-run news agency SANA reported.

"We believe that there is credible information that Iran is assisting Syria ... in quelling the protesters," said State Department spokesman Mark Toner earlier in the day.

"It's a real concern to us," he said. "If Syria is turning to Iran for help, it can't be really serious about real reforms."

"We believe that Iran is materially assisting the Syrian government in its efforts to suppress their own people," officials told the paper, adding that Tehran is sharing "lessons learned" from the 2009 post-election crackdown on demonstrations that sought the ouster of Iranian President Mahmoud Ahmadinejad.

Widespread protests have shaken Syria in the last four weeks, with demonstrations reported in its second city Aleppo on Thursday following a weekend of confrontation between security forces and activists during which 30 civilians were killed, according to rights activists.