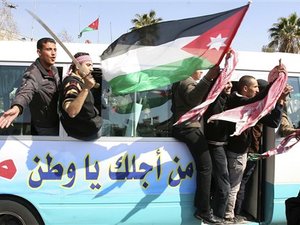 Islamists, youth groups and other opposition parties plan to hold pro-reform demonstrations across Jordan on Friday, as Americans were told to avoid protest areas.

The powerful Islamic Action Front (IAF) and other groups, including leftists, will march after Friday midday prayers from Al-Hussein mosque in Amman city center to the nearby city hall "to emphasize national unity and demand reform," they said in an advertisement in local papers.

At the same time, the March 24 youth movement, which was attacked last month by government supporters in clashes that killed one man and injured 160, will hold a sit-in outside city hall "to call for reform and more efforts to fight corruption," the group said on their Facebook page.

Other groups are planning similar activities across the country.

The U.S. embassy in Amman told Americans on Thursday that protests "are scheduled to take place in Maan, Karak and Aqaba."

"Demonstrations may also take place elsewhere in Amman and in other cities in Jordan. U.S. citizens are advised to avoid these areas," it said on its website.

"U.S. citizens are reminded that even demonstrations intended to be peaceful can turn confrontational and possibly escalate into violence."

Jordan has been the scene of three months of protests calling for political and economic reforms as well as the stamping out of corruption.