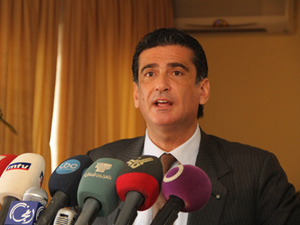 Former MP Misbah al-Ahdab said that divisions were beginning to emerge in the March 14 camp, according to a WikiLeakes cable published exclusively in al-Akhbar newspaper on Friday.

“We’re not a united team, we only gather to have our pictures taken,” Ahdab told then U.S. Ambassador to Lebanon Jeffery Feltman in a meeting on August 17, 2006.

The cable revealed that Ahdab expressed his anger from the March 14 forces and the way they handle issues, saying that then MP Saad Hariri “should stop living in the past and start taking steps to reform Lebanon.”

The former MP was quoted as saying that Hariri “is surrounded by a group of obedient people who convince him that his performance is excellent.”

Ahdab also mocked the campaign promoted by Hariri’s media that he represents the “diplomatic resistance.”

Addressing the dispute over then President Emile Lahoud’s term in office, he said that the only way to oust him was to “link him and his son in the Bank al-Madina scandal and the U.N. Oil for Food Program” even if some March 14 figures were found to be involved in them.

“Some sacrifices need to be made to topple Lahoud,” he stressed.

Feltman mentioned that overthrowing the President without the consent of Speaker Nabih Berri will lead to disrupting the political scene for a month or two in Lebanon, which will be a positive development since it will weaken Hizbullah.