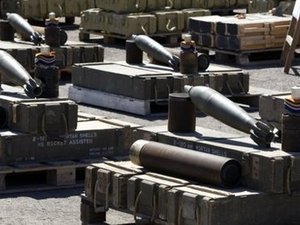 Iran has smuggled more weapons to Hizbullah, Syria, and Palestinian groups in recent months, taking advantage of the wave of unrest in the Middle East, reported the Israeli newspaper Haaretz on Friday.

Because international attention is focused mainly on regime changes and local intelligence services are busy protecting their rulers, the Iranians have been able to act with greater impunity, it said

According to western intelligence, only a relatively small quantity of smuggled Iranian weapons is currently being intercepted, it noted.

Senior Israeli government officials told Haaretz: "Iran is inciting the entire region, from Afghanistan and Yemen to Egypt and Morocco."

At least seven cases of weapons smuggling led by the Iranian Revolutionary Guards have been reported during the past two months.

In mid-March, Israel Navy commandos stopped the Victoria off the coast of Israel carrying weapons and ammunition sent from Iran and bound for Islamic Jihad activists in the Gaza Strip, the newspaper continued.

Shortly after the Victoria was intercepted, Turkey announced it had stopped two Iranian planes, one after the other announcing that the planes had been carrying mortars bound for Syria, Haaretz stated.

According to western intelligence sources, the weapons were bound for groups in Lebanon or Gaza.

In addition to the northern smuggling route via Turkey and Syria, Tehran is also operating a southern route, through Sudan and Egypt to Sinai and Gaza, it continued.

Despite the regime change in Egypt, the Egyptian security forces have been concerned enough over the smuggling (and particularly over the possibility that some of the weapons could be handed over to extremists within Egypt) to act against it.

The most recent incident took place last week in Sudan, when two people were killed in an air attack on the road between the Khartoum airport and the city of Port Sudan.

The Sudanese government accused Israel of being behind the attack, which Israel neither confirmed nor denied, said Haaretz.

According to a Kuwaiti newspaper report, one of the men was Abdul-Latif Ashkar, a Palestinian who played a central role in Hamas weapons smuggling and purportedly the successor to Hamas weapons procurer Mahmoud al-Mabhouh, whom Hamas accused the Mossad of assassinating in January 2010.

The Iranians are also smuggling large amounts of money to Hamas in Gaza.

Last month the Israel Air Force attacked a car carrying several Hamas operatives near Rafah. The car was carrying as much as $18 million, according to various sources.

Senior government officials in Israel told Haaretz: "Iran is inciting the entire region, from Afghanistan and Yemen to Egypt and Morocco."