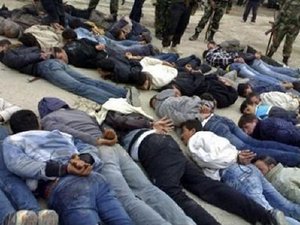 Lawyers, activists and journalists who have endorsed or promoted the protests have also been detained, the rights group said.

Human Rights Watch said it based its torture allegations on interviews with 19 people who had been detained by the "mukhabarat" intelligence services in Damascus, Deraa, Duma, al-Tal, Homs and Banias, as well as several families of detainees. The group included two women and three teenagers aged 16 or 17.

The group said in a statement it had reviewed film of people released in Deraa "whose bodies appeared to have marks from torture."

"All but two of the detainees arrested during the protests told Human Rights Watch that mukhabarat officers beat them while arresting them and in detention, and that they witnessed dozens of other detainees being beaten or heard screams of people being beaten," the statement said.

Detainees told the group they were also tortured with "electro-shock devices, cables and whips." The statement said inmates were held in overcrowded cells and many were deprived of sleep, food and water.

In addition to the three children interviewed by Human Rights Watch, witnesses reported seeing other children detained and beaten in facilities where they were held.

"President Assad needs to rein in his security services and hold them to account for arbitrary arrests and torture," said Joe Stork, the group's deputy Middle East director.

Syrian authorities have announced an amnesty for scores of prisoners detained since the protests erupted on March 15.

But on top of accusations by rights groups, the United States has said there is evidence that Iran is helping in the crackdown on demonstrators.