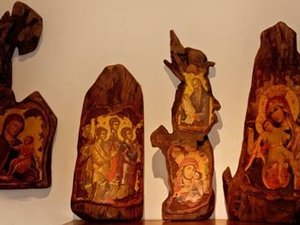 A London gallery has sent back to Greece six stolen icons dated from the 18th and 19th centuries, and six more found in The Netherlands were to be returned, the culture ministry said Thursday.

The pieces returned from Britain were temporarily displayed at a Byzantine museum in Athens where Culture Minister Pavlos Geroulanos said the finds were a "great success against the forces that want to harm our patrimony".

Six found in a gallery in Amsterdam would be returned next, the minister said.

The icons were stolen from churches and monasteries at Epire and Pilion in northeastern Greece in 2009 by a network of smugglers, according to police.

Six were found in The Temple Gallery in London and gallery owner Richard Temple has said he bought them without knowing they had been stolen.

Authorities were able to track down the religious works through an Internet site set up to seek information about pieces stolen in Epire, said the region's prefect, Alexandros Kahrimanis.

Inspired by Italy's success in similar cases, Greece has intensified its fight against the theft of its artistic and antique heritage with a notable achievement the 2006 return of artefacts by the Getty Museum in the United States.