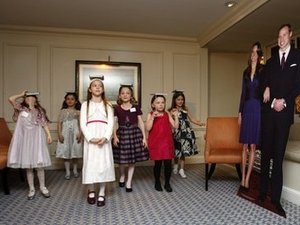 Australian thieves have made off with a life-size cutout of Prince William and his bride in a midnight heist from a luxury hotel offering special wedding stays, a spokeswoman said Friday.

The cardboard couple had become something of a draw-card since being erected in the lobby of Melbourne's Hotel Windsor earlier this year, bringing a steady crowd of guests and locals keen for a happy snap.

But the cutout was plundered on an overnight shift this week and despite pleas to guests and staff, has not been put back, said hotel spokeswoman Prue Fisher.

"It's probably gone, I would say, in the middle of the night I'm thinking," Fisher told Agence France Presse.

"Unfortunately anyone can just come in off the street and probably just get it in the middle of the night. It could have been a guest, but I doubt it," she added.

The cutout, a replacement for which is now en route from manufacturers in Britain, was an advertisement for the hotel's "Royal Wedding Package", offering one night and a champagne breakfast in a "stately" Victorian suite.

Guests also receive a Aus$2,000 gift certificate at Hardy's, "the only jeweler in the southern hemisphere to hold the Queen's Royal Warrant".

"You can live like royalty without leaving the city," the promotion promises.

Fisher was loath to point the finger at republicans or royalists, and said she'd been surprised at the fervor the cutout had generated.

"I just happened to be in the lobby the other day when four or five people dressed in Batman suits came in and had their photo taken with it, so it's caused a bit of interest," she laughed.

"I'm actually totally surprised at how much it's taken off, the cutout itself and the wedding in general."

William's late mother, Diana, was immensely popular in Australia and the young prince was warmly received on two recent visits Down Under.

Once a British penal colony, Australia voted against splitting from the monarchy in a 1999 referendum. Prime Minister Julia Gillard believes the country should secede after Queen Elizabeth II dies.