Mustaqbal: Loyalty to Resistance Bloc Has Eagerly Rushed to Condemn Us without Trial, Documents, Proofs 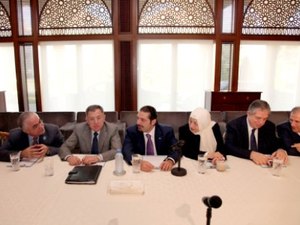 The press office of the Mustaqbal parliamentary bloc on Friday responded to “the escalating and coordinated campaign against the Mustaqbal Movement and some of its MPs.”

“The Syrian ambassador to Lebanon knows very well that the Lebanese and Syrian states have a judicial agreement that regulates the judicial relation between the two countries,” the press office said in a statement.

“If anything needs to be said about a Lebanese involvement in Syria’s events, then the Syrian justice ministry must prepare a file and hand it over to the Lebanese State through the regular channels in order for the Lebanese judiciary to perform its duties,” the press office added.

On the other hand, the Mustaqbal bloc noted that Hizbullah’s Loyalty to Resistance parliamentary bloc “has eagerly rushed to condemn a broad Lebanese political movement without a trial, documents or evidences, in a manner which does not deviate from its well-known, constant approach of launching accusations and disregarding courts … whether Lebanese or international.”

On Thursday, the Loyalty to the Resistance bloc slammed the Mustaqbal Movement, accusing it of being responsible for the problems in Lebanon.

It said in a statement: "The problems plaguing Lebanon are the result of the Mustaqbal Movement's policies and governments that have turned Lebanon into a farm" at the American administration's mercy.