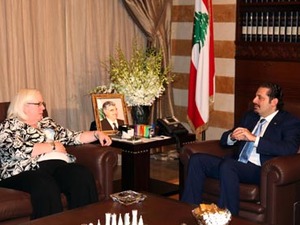 The March 14 General-Secretariat has reportedly urged U.S. Ambassador Maura Connelly to preserve Lebanon’s stability after the latest Syrian accusations of al-Mustaqbal movement’s involvement in funding a terrorist cell in Syria.

Media reports said Saturday that she discussed with them the latest developments.

An Nahar daily said, however, that Soaid informed her that “there are exposed Syrian attempts to link” developments in Syria with Lebanon.

“The March 14 forces consider that the protection of Lebanon, its civil peace and stability are a primary Lebanese responsibility but believe that there should be an Arab and international responsibility as well,” Soaid told Connelly, according to An Nahar.