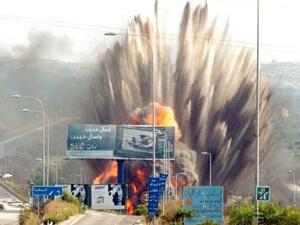 A security source from the Northern Israeli command warned 150 villages in southern Lebanon that the Jewish state would destroy “every house or building from where missiles are launched.”

Israel has evidence that Hizbullah is continuing to prepare for war, the official said.

He stated that Israel has provided the United Nations with reports and maps that reveal the presence of 1,000 Hizbullah arms depots and 40,000 missiles in bunkers.

Hizbullah has turned 150 southern villages into a huge military camp, he said. Accordingly, the Israeli army is not responsible for any harm that might inflict the citizens of this region.

Meanwhile, The Jerusalem Post said that the Israeli army has drawn up a comprehensive multi-year strategy that would help protect Israel from all fresh dangers.

In this plan, the army reels from its failures and mistakes following the Second Lebanon War in 2006, the Israeli daily said.

The Israeli army is unquestionably better prepared today for another ground war in Syria, Lebanon or the Gaza Strip, it added.

The new plan recognizes that the Israeli army is already at war on some of its fronts. It is waging a war against Iran’s nuclear program – mostly in the shadows and below the surface – and is also, at the same time, fighting on the high seas against weapons smuggling to Hamas in Gaza and Hizbullah in Lebanon – demonstrated by the seizure of Iranian arms on the Victoria cargo ship last month, the Post stressed.