Consultations Focus on Change of Portfolios but Suleiman Sticks to Interior, Defense Ministries 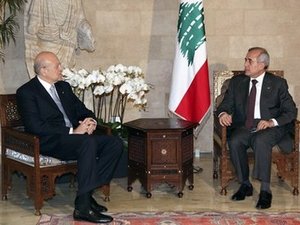 Premier-designate Najib Miqati continued his consultations to break the impasse over the new government makeup after urging the leaders of the main parties to facilitate the formation of his cabinet.

In the meantime, Hussein Khalil met with Free Patriotic Movement leader Michel Aoun whose demand for the interior ministry portfolio is one of the obstacles facing the cabinet formation efforts.

Miqati’s circles refused to comment on the meetings, only saying that there “are new positive beginnings for new thoughts but it is still premature to forecast the results.”

An Nahar daily said Saturday that the discussions focused on switching cabinet portfolios between different parties but stressed that President Michel Suleiman continues to hold onto the interior and defense ministry portfolios.

Informed sources told An Nahar that rumors that Suleiman had decided to give up his demand for the two portfolios are only aimed at drawing counter reactions.

Miqati said Friday that he had agreed with the president to give the cabinet formation bid extra time to allow for a new round of contacts with the involved parties.

Speaking to supporters at his residence in the northern city of Tripoli, the premier-designate said the extra time was “an additional opportunity for the political leaders concerned to reevaluate their stances and draw lessons from the events that are taking place in the region.”

Meanwhile, An Nahar said that Hizbullah leader Sayyed Hassan Nasrallah held talks with Caretaker Minister Jebran Bassil on Wednesday night in what was seen as a meeting aimed at setting the stage for talks between the Shiite party chief and Aoun.