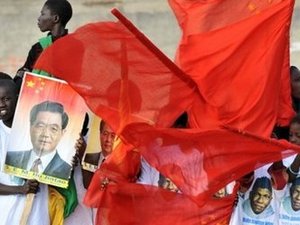 China bore 14 billion CFA francs of the total costs and Senegal the rest.

Senegal's ambassador to China, Pape Khalilou Fall, said in an interview published in the pro-government newspaper Le Soleil earlier this year that the project was financed through "non-repayable grants".

The opening ceremony which featured shows by artists from Senegal, Mali and China was also attended by Malian President Amadou Toumani Tourr and Chen Zhili, a senior official of China's National People's Congress, or legislative.

The six-storey 1,800-seat building is part of Dakar's cultural park which is currently under construction. The project started in December 2008.

The multifunctional Grand Theater will also be open for concerts, films and conferences.

Chinese Vice Premier Hui Liangyu was in Senegal in January to oversee projects China is carrying out in the country.

Among them are the rehabilitation of 11 regional stadiums funded by China and the manufacture of Chinese minibuses in a factory opened in Thies, west of Dakar at the end of 2009.