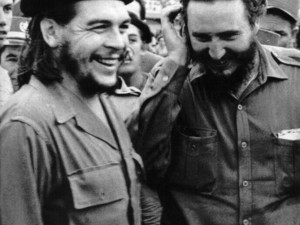 Cuba readied a huge military parade Saturday to celebrate the 50th anniversary of its victory over the CIA-backed Bay of Pigs invasion for a Communist Party congress setting new political and economic goals.

Painters, electricians and audio operators put the finishing touches on Plaza de la Revolucion, as troops drove tanks and other military vehicles to their designated locations along the streets.

Children, youth and veterans will precede the parade of troops and weaponry, local television reported.

As a symbol of the revolution's future, thousands of youths will bring up the rear of the parade, after which the Cuban Communist Party will begin its first party congress in 14 years.

Tens of thousands of Havana residents have been invited to participate in the parade by their student organizations, trade unions and the Committees for the Defense of the Revolution community groups that promote social welfare.

A little ways away from the square, masons and painters were working overtime to renovate the street corner where leader Fidel Castro proclaimed the socialist character of the revolution, a day before 1,400 US-backed Cuban exiles landed at the Bay of Pigs.

Within just 72 hours of bloody combat on Playa Larga and Playa Giron 200 kilometers (124 miles) southeast of Havana, Castro had routed out the invaders in what Cuba celebrates as "the first great defeat of imperialism in Latin America."

During the Communist Party congress, thousand delegates are to vote on economic reforms proposed by President Raul Castro, update the country's one party political system, and either re-elect or relieve an ailing 84-year-old Fidel as party leader.

Warning "either we change course or we sink," the 79-year-old Raul convened the congress to recast Cuba's Soviet-style centralized system "without restoring capitalism," or deviating from the socialist path his brother blazed a half century ago.

It will be the last meeting of the "historic generation" of guerrillas who swept to power on January 1, 1959 and fought the United States in a long chain of Cold War battles that began with the Bay of Pigs invasion on April 17, 1961.

The government has said the congress will formally enshrine many minor economic reforms the government has adopted over the past year. Reforms are desperately awaited in a country where the average salary is about $20 a month, domestic food production is a problem and corruption widespread.

Among the moves put on track in 2010: Havana is eliminating 20 percent of state employees.

To help pick up slack on the unemployment front, it is expanding the categories of legal self-employment to 178, decentralizing the food distribution system, expanding areas where foreign investment is allowed, cutting back on subsidies and imposing a tax system.