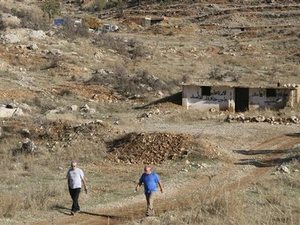 Syrian troops have deployed along Syria’s border with Lebanon on Saturday in an effort to combat terrorism, reported the daily An Nahar Sunday.

It added that the Syrian border patrol have intensified their procedures along the Syrian-Lebanese border.

Earlier this week, hundreds of trucks were held up at a border crossing between Lebanon and Syria amid heightened security measures enforced as the Syrian regime faces unprecedented protests.

"Between 400 and 500 trucks, most with Syrian or Jordanian license plates, have been held at the Abboudiyeh border crossing for hours for inspection by Syrian security forces," a Lebanese security source told Agence France Presse.

"The inspection of each truck is taking about one hour," he added. "These measures have been in place for three days."

Thursday's security measures, the toughest in years, come amid accusations by Damascus that members of Caretaker Premier Saad Hariri's Mustaqbal Movement have been funding and arming anti-government protesters in Syria.

Syrian state television on Wednesday aired "testimonies" of three people saying they had received funds and weapons from MP Jamal al-Jarrah to fuel a wave of protests against the ruling Baath regime.

Jarrah has denied the allegations.

In 2006, trucks along the Syrian-Lebanese border were also held up in what was thought to be a retaliatory measure by Syrian authorities amid tension between the two countries.

It is about time they make a serious effort at closing all arms smuggling between Lebanon and Syria and BOTH WAYS.
They cannot turn a blind eye, if we do not want to say conspire, to arms smuggling to all the non-governmental organisations in Lebanon including the criminal ones.
It is amazing how quickly they start accusing others for their internal problems.
It is very strange that they are not accusing Israel today.