Hizbullah Presented All it Can to Facilitate Government Formation, Including Advocating Miqati’s Support to STL 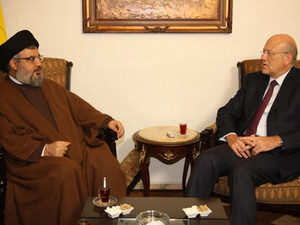 They explained that Nasrallah had informed Miqati in their last meeting that he is free to support and even finance the Special Tribunal for Lebanon and choose whichever ministerial portfolios he wants to grant the party.

Hizbullah therefore believes that it had presented Miqati with all it can to allow for the government to be formed with ease and without delay.

Sources close to the party therefore attributed a number of reasons impeding the premier-designate from forming the government, such as Miqati’s wealth and concern that the United States may take financial measures against him and Lebanon’s economic sector should he form a one-sided government.

They added that he has also lost some support on the Sunni scene in Lebanon in favor for Caretaker Prime Minister Saad Hariri, which may decrease even more if he formed a one-sided government.

Miqati also risks antagonizing Saudi Arabia should such a Cabinet be established, especially since tensions are brewing between Riyadh and Tehran over regional developments, they noted.

Furthermore, should he succeed in forming a government, he will be faced with the task of dealing with the case of the kidnapped Estonian cyclists, the return of Shiites who were expelled from Gulf states, and the possibility of the instability in Syria spilling over in Lebanon.