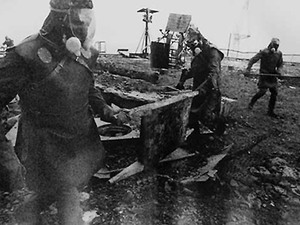 It was the early hours of April 26, 1986 and operators at the Chernobyl nuclear power station in the Soviet republic of Ukraine were to carry out an electrical power test at reactor number four.

The test, which repeated one carried out the previous year, was to take advantage of a planned shutdown of the reactor for routine maintenance and the lowering of its power had already started the previous afternoon.

The process of the test started at 1:23 am local time. But by the end of that fateful minute, an uncontrollable power surge had occurred, sparking two explosions in the reactor and the ejection of deadly radioactive material into the air.

The reactor was destroyed and a plume of its radioactive contents rose up to one kilometer (3,300 feet) into the sky, some falling as debris in the area around the site but also being blown as far as western Europe.

Subsequent international reports have blamed the poor design of the Soviet RBMK (High Power Channel-type Reactor), a lack of safety culture at the plant and errors by operators.

"01:24: Severe shocks," the chief reactor control engineer wrote in his operating log, quoted in a report compiled for the U.N. nuclear watchdog in 1992.

"The RCPS (Reactor Control and Protection System) rods stopped moving before they reached the lower limit power switches; power switch of clutch mechanisms is off," the engineer wrote.

One worker was killed instantly by the explosions. His body is believed to have never been recovered. Another died a few hours later in hospital as a result of his injuries.

A group of 14 fireman arrived minutes later to battle the fires and dozens more followed in the next hours, receiving abnormally high doses of radiation.

But the Soviet authorities stayed silent on the disaster for three days, with the official news agency TASS only reporting an accident at Chernobyl on April 28 after the Forsmark nuclear plant in Sweden reported unusually high radiation.

The town of Pripyat, which housed the plant's workers three kilometers away from the station, was only evacuated at midday on April 27, one-and-a-half days after the explosion.

For the traditional revolutionary celebrations for May 1 in Kiev, the local authorities carried on with the usual marches involving children even as the wind turned and risked covering the Ukrainian capital in radiation.

At the time, those who left the capital were accused of giving into panic and it was only on May 15 that mothers and children were allowed to take time off to seek sanctuary.

Soviet leader Mikhail Gorbachev, feted around the world at that time for his glasnost policy of greater Soviet openness, only commented publicly on the disaster on May 14.

Chernobyl's managers initially tried pumping water into the reactor core but when this proved unsuccessful they turned to dumping boron carbide and a total of 4,000 tons of lead, sand and clay on the facility.

The material was dropped from helicopters, and pilots on the initial flights received abnormal doses of radiation as they hovered in stationary mode over the reactor.

Later they dumped their loads while moving over the reactor, causing additional destruction around the area that may have assisted the spread of the radiation.

By May, the authorities had succeeded in feeding nitrogen into the reactor to cool it down.

In October, a concrete shelter, dubbed a sarcophagus, was completed to prevent further leakage of radiation from reactor number four and allow the other reactors at the Chernobyl plant to continue producing power for Ukraine.

After years of international pressure, independent Ukraine finally shut down the Chernobyl Atomic Power Station for good in December 2000. The sarcophagus remains in place, well beyond its initial lifespan, although work on a replacement has finally started.

Disputes rage on the death toll with some estimates backed by U.N. committees saying only a few dozen fatalities could be directly attributed to Chernobyl but some environmentalists saying the figure is in the tens of thousands.