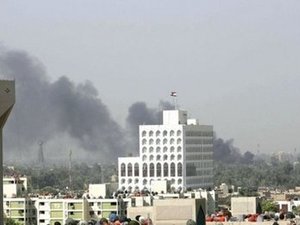 A suspected al-Qaida suicide bomber blew up a car by the Baghdad offices of Al-Arabiya television killing four people on Monday, a month after the Saudi-funded channel was warned of insurgent threats.

The bomber struck at around 9:30 am (0630 GMT) in front of the station's bureau in the city center, leaving a massive crater and sending a plume of smoke into the air that could be seen from several kilometers away.

Majid Hamid, a journalist for the pan-Arab satellite channel, said four people had been killed in the attack -- three security guards and a female office assistant. That toll was confirmed by an official at al-Yarmouk hospital in west Baghdad.

An interior ministry official, speaking on condition of anonymity, put the casualty toll at three dead and 16 wounded. Former deputy prime minister Salam al-Zawbayi and two of his guards were among the wounded.

"There was a huge explosion that shook the building -- all the rooms were damaged," Al-Arabiya journalist Tareq Maher told the channel in a live broadcast.

The street in front of the channel's offices was covered in shards of glass and debris, and nearby buildings showed signs of damage as did several cars.

"I arrived at work and when I entered our office, I heard a huge explosion," said Abu Mohammed, 34, who works for a company whose offices are close to the scene of the blast.

"I thought the building would collapse on my head -- the windows shattered and I ran outside. There was dust and smoke everywhere and, a few minutes later, I heard the sound of ambulances."

"These are the methods of al-Qaida," he told Agence France Presse. "The goal of this operation was to attract media attention."

Atta said that the explosives-laden vehicle had passed through a checkpoint, and charged that there may have been "cooperation" between the car's driver and the guards.

Major General Jihad al-Jaabari, the head of the Iraqi army's explosives handling unit, said the bomber was an Iraqi and added that the vehicle was carrying more than 100 kilograms ammonium nitrate.

"He was waved through, but if they had searched him, it would have been easy to find the explosive material," Jaabari said.

Monday's bombing was the latest sign of the threat facing journalists working in Iraq, and came just a month after Al-Arabiya closed its Baghdad offices citing government warnings of a threat of insurgent attack.

A total of 249 media workers have been killed since the U.S.-led invasion of 2003, according to the Iraq-based Journalism Freedom Observatory.

Al-Arabiya, which is perceived by extremist groups as being too pro-Western, has been no stranger to attack by suspected Sunni Arab insurgents or pressure from Iraq's Shiite-led government.

In September 2008, its Baghdad bureau chief Jawad Hattab escaped unharmed after spotting a bomb attached to his car, which was eventually detonated by remote control.

In October 2006, a car bomb targeting the channel's then bureau killed seven people and wounded 20.

And in February 2006, presenter Atwar Bahjat and two colleagues were kidnapped and murdered in the mainly Sunni town of Samarra as they covered the bombing of a revered Shiite shrine, an attack that plunged the country into sectarian bloodshed.

The channel's ownership by Saudi and other Gulf investors has also made it the focus of suspicions by Iraq's Shiite-led government that its news agenda reflects the concerns of their Sunni governments.

In September 2006, it was banned from reporting out of Iraq for a month after officials took issue with its coverage of the passage through parliament of a bill strongly opposed by Sunni Arabs granting all of Iraq's provinces the right to seek regional autonomy.

The month-long ban prompted condemnation from international press watchdogs and an expression of concern from Washington.

U.S. and Iraqi officials have warned of the dangers of an upsurge in violence as negotiations on forming a new governing coalition have dragged on, giving insurgent groups an opportunity to further destabilize the country.

More than four months after a March 7 general election which gave no single bloc an overall parliamentary majority, the two lists that won most seats are still bickering over who should be the next prime minister.(AFP)