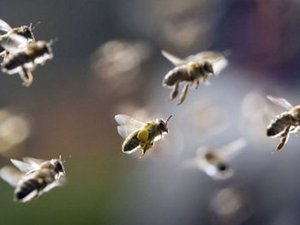 An Irishman who decided to climb a ladder and move a beehive after downing a few beers has paid the price, being stung more than 60 times.

Andrew Short, an amateur beekeeper in Australia, returned home from the Melbourne Comedy Festival Monday evening in high spirits and thought he'd move a hive from his back yard to the roof of his house.

He figured that as it was past midnight, the bees would be asleep. Instead, they attacked him.

"A few beers maybe and a ladder, it's a bad combination," Short told reporters after hospital treatment for stings to his face, chest, neck, arms and abdomen.

"The problem was, I was up the ladder holding the hive, so the job wasn't done yet, and at that point it was easier to go up than go down," he added.

"So they were there stinging my eyes, but I had to carry on to try and make sure that I wasn't going to fall off the roof any more, so there was a little bit of work to do, and then I said 'best to go down'."

His main worry was being too scared to call his wife, who was away with their two young daughters.

"She was away, so I thought it was the perfect night to do it, because you can't ask the missus to get involved in lifting beehives, oddly," he said.