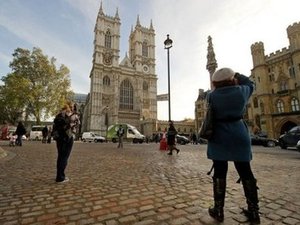 Westminster Abbey, where Prince William will marry Kate Middleton, has been paramount to Britain's royal family through the centuries and was the scene of his mother princess Diana's funeral.

Construction began on the imposing Gothic church near the Houses of Parliament in central London in 1245 under the orders of king Henry III, but a church has been on the site for more than a thousand years.

William I was the first king to be crowned there in 1066 and the tradition continues to this day, with Queen Elizabeth II -- Prince William's grandmother -- crowned on the Coronation Chair in 1953.

The abbey's history has a deep personal resonance with the 28-year-old prince, as the funeral of his mother took place there in 1997, following her death in a Paris car crash.

In choosing the church for his wedding, the prince rejected St Paul's Cathedral where his mother and father, Prince Charles, married in a fairytale wedding in 1981.

But he follows in the footsteps of many other royal couples, including the queen, who married Philip Mountbatten in 1947, and her parents, prince Albert -- later king George VI -- and Elizabeth Bowes-Lyon, who wed in 1923.

The most recent marriages in the abbey have not ended in success.

Queen Elizabeth's sister, princess Margaret, and her children Princess Anne and Prince Andrew all had their weddings there but subsequently divorced.

Around 1,900 guests will attend the wedding, though most will not be able to see the ceremony due to the screen separating the nave from the choir.

The royal family and the Middletons will sit closest to the couple, with foreign royalty and other important guests coming next.

The abbey -- or to give it its full name, the Collegiate Church of St Peter, Westminster -- is a "royal peculiar" which means it is exempt from any ecclesiastical jurisdiction other than that of the monarch.

The abbey has witnessed some 38 coronations and 18 British monarchs are buried inside.

Other notable personalities have memorials in the abbey, including author Jane Austen and Charles Darwin, the father of evolutionary theory.

There is a memorial stone to wartime prime minister Winston Churchill inside the west entrance.

It sits near the Tomb of the Unknown Warrior, whose body was brought from continental Europe after World War I. The grave represents all Britain's fallen troops.

Middleton may choose to follow Queen Elizabeth and her mother before her in leaving her bouquet on the tomb.

The abbey also remembers historical figures from abroad, including U.S. civil rights leader Martin Luther King, a statue of whom stands in the west entrance.

Despite its royal connections, the abbey is still a working church and holds regular services open to the public.