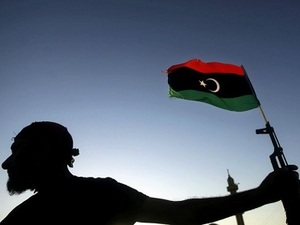 One person was killed and five others wounded during clashes near Bani Walid, a final bastion of supporters of slain Libyan leader Moammar Gadhafi, local leaders said Tuesday, warning of looming disaster.

"A resident of Bani Walid was killed in combat against armed groups from the city Misrata," Bani Walid spokesman Massud al-Waer told AFP.

The evening clashes lasted three hours, he added, and centered in the valley of Mardun, 10 kilometers east from Bani Walid on a road leading to the Mediterranean city of Misrata.

Salem al-Waer, leader of the largest armed group in Bani Walid, confirmed that there had been "one martyr" and several wounded in a bid to "push out the armed assailants" who had reached the borders of the oasis town in the morning.

"The situation is under control now," he added.

The fighting comes just one week after the death of Omran Ben Shaaban, a former rebel from Misrata who was credited with capturing Gadhafi but later abducted in the rival town of Bani Walid.

Shaaban, 22, was kidnapped and shot in July in Bani Walid. The Misrata native was freed 50 days later in critical condition thanks to the mediation efforts of Mohammed Megaryef, president of the ruling General National Congress (GNC).

This former rebel had shot to fame last year with several photographs and videos showing him grabbing Gadhafi at the moment of his capture on October 20, 2011. in Sirte before he was killed.

Shaaban's death stoked tensions between Misrata and Bani Walid, neighboring but historically rival towns which found themselves on opposite sides of the 2011 conflict.

Former rebels from Misrata and other Libyan cities believe that Bani Walid was never truly "liberated" and that it still shelters remnants of the former regime and diehard Kadhafi loyalists.

The GNC last week ordered the ministries of defense and interior to find those who kidnapped Shaaban and "use force if necessary."

Commander Salem al-Waer warned that a fresh attack on Bani Walid could "plunge the country into civil war" as the town counts on the support of the Warfalla tribe which has members from Tripoli in the west to Sirte in the east.

"If Bani Walid is attacked that will be the end of the February 17 revolution and of Libya," echoed Massud al-Waer, adding that a reconciliation committee was expected to visit the town on Wednesday.

In July, fighters in Misrata threatened to attack Bani Walid after two journalists from their city were kidnapped there. A crisis was averted thanks to intense mediation by the authorities who obtained the men's release.