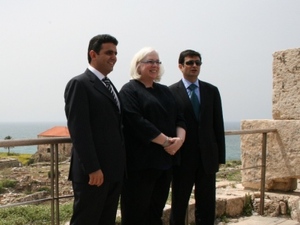 On April 19, 2011, U.S. Ambassador to Lebanon Maura Connelly and Minister of Culture Salim Wardy visited Jbeil to tour the archeological site of ancient Byblos. Ambassador Connelly was also accompanied by Jbeil Mayor Ziad Hawwat as they toured the Byblos castle, the Houssami Heritage House, and the ancient port of Byblos. The tour highlighted the importance of preserving Lebanon’s unique heritage sites for future generations. The United States has demonstrated a long-standing commitment toward preserving Lebanon’s heritage, providing over $400,000 since 2003 toward projects ranging from conserving the Umayyad-era baths of Anjar to restoring the Islamic manuscripts at the Lebanese National Library.

Ambassador Connelly also met with municipal leaders in Jbeil to discuss the recently completed $28 million Municipal Governance Assistance Program that included the Jbeil-Byblos Municipality. The program streamlined and digitized administrative processes, while improving customer service for the citizens of Jbeil. The program, which is sponsored by the United States Agency for International Development (USAID) in partnership with the State University of New York/Center for Legislative Development (SUNY/CLD), has also provided new public lighting, renovated the entrance to the Old Souk and beautified the central public square.

Through these important economic and cultural programs, the United States reaffirms its commitment to a strong partnership with Lebanon and to Lebanon’s future.