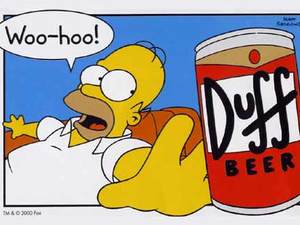 A Lithuanian company said Wednesday it had frozen publication of the local version of "The Simpsons" comic after a fine for advertising Duff beer, the fictional favorite of anti-hero Homer Simpson.

In both the original cartoon show and the comic, hapless Simpson family father Homer can rarely resist his beloved Duff.

Pavilonyte confirmed a report in the Lithuanian daily Verslo Zinios that the fine came after the watchdog ruled that actual Duff beer was sold in Argentina, Mexico, Spain, Portugal and Germany.

The spin-off Duff is reportedly not licensed by U.S. cartoonist and Simpson creator, Matt Groening.

Media Incognito is seeking ways to resume publication without breaching Lithuanian laws banning advertisements for alcohol in the media.

However, U.S. company Bongo Comics, which licenses local versions of the comic, does not allow content changes.

The monthly Lithuanian version, "Simpsonai", had a circulation of 10,000 in this Baltic nation of 3.2 million.