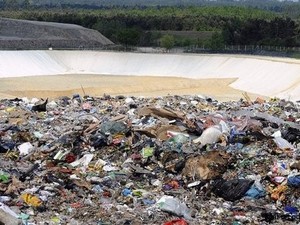 Police raiding an illegal dumping ground in southern Italy this week made a startling discovery -- a richly-decorated and well-preserved ancient Roman tomb dating back to the second century.

The underground entrance to the tomb was found beneath a huge pile of truck tyres near Pozzuoli -- a working-class port town just west of Naples in a region that has struggled with a waste disposal problem for years.

The tomb was near a 17th-century tower that was also part of the dumping ground, which has now been seized by police. The owner of the site has been charged with violating environmental and historical preservation laws.

Police said in a statement they alerted local archaeologists from a nearby ancient Greek site after finding a marble-lined tunnel leading to the tomb.

Video footage released by the police showed the stuccoed interior of the mausoleum filled with debris, as well as discarded car batteries at the dump.

The Naples region is rich in Greek and Roman archaeological remains including the ancient city of Pompeii -- a UNESCO World Heritage site.