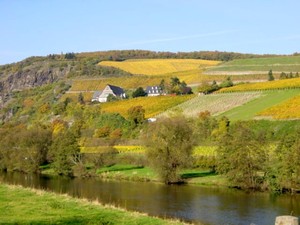 Axel Pauly's family has been making wine in Germany's stunning Mosel Valley for 13 generations but he warns his livelihood is riding on decisions likely to be taken in the coming weeks.

Pauly and many producers of the region's famed Rieslings have joined forces to battle a massive motorway and bridge project that would straddle the river Mosel and gouge a sizable chunk out of the breathtaking local landscape.

They have won the impassioned support of international wine critics, who share their concern that a man-made intrusion could throw off the delicate alchemy of the vineyards' steep slate slopes, drip irrigation and sun exposure.

"My customers tell me if you don't fight to protect this pristine environment, it must be worth nothing to you and your product must not be worth anything either," the 57-year-old says, surveying a long, deep gash in the soil above his fields that is to become a four-lane autobahn.

He says disrupting the natural irrigation system, just one of the valley's blessings, with this "concrete monster" could have dire consequences for fields that have been producing wine since Roman times.

Germany's Rieslings have won ardent fans around the world in the last decade and exports have soared. Hugh Johnson, the British expert behind the annual Pocket Wine Books, has thrown his weight behind the protests.

"It is shocking to watch how German politicians are selling out and destroying one of their finest cultural assets," he wrote in a guest column for a German newspaper.

The Hochmoseluebergang (Upper Mosel Crossing) has been in the works since 1968 at the height of the Cold War, when the tens of thousands of U.S troops stationed in the region sought a speedier link between their bases.

The intervening years were marked by revised plans, court challenges and impact studies which the opponents say failed to address their key concerns. Then came a decisive 2008 stimulus package.

At a cost of an estimated 330 million euros (476 million dollars), the project would be an east-west supplement to Germany's road network, already one of the densest in the world. It is slated for completion in 2016.

The plan's centerpiece would be a 1.7-kilometer-long (one-mile-long), 10-column bridge spanning two low mountains at a height of 158 meters, tall enough for St. Peter's Basilica in Rome to fit beneath with room to spare.

Construction finally began tentatively two years ago but a record 15-percent result in last month's state election by the Green party, which opposes the project, could now turn out to be a game-changer.

The Greens are starting coalition talks with the ruling Social Democrats, longtime backers of the new highway, and both sides of the debate are watching closely to see who blinks first.

"I believe the parties are ready now to consider a solution without the bridge and a broad highway," said an optimistic Georg Laska, 52, spokesman for the ProMosel citizens' group opposing the project.

But halting the project could be expensive, according to the state economy ministry, with around 250 million euros of the budget already spent or contractually earmarked. ProMosel disputes the figure.

Supporters say the project would cut travel times to and from the Belgian and Dutch ports and the German business capital Frankfurt, opening up a wealth of possibilities for commuters as well as day-trippers.

"Better transport connections will help the entire economy, not just a segment of it," said Walter Kunsmann, 65, chairman of the regional economic promotion board.

"Now the minority has to accept what is truly an essential project to guarantee our prosperity for coming generations."

Berhard Simon, 31, whose family business exports meat across Europe and to Asia, sympathizes with those who do not want a motorway roaring past their land but says there might even be an environmental upside to the project.

"Every day my trucks have to barrel through the Mosel Valley on these steep, winding roads," he says, arguing that the bridge would cut down on noise, exhaust and traffic in local towns as well as slashing transport costs.

But artist Knut Aufermann, 38, said massive -- and potentially successful -- public resistance to other infrastructure projects such a revamped rail network in Stuttgart, 300 kilometers to the south, pointed to a new way of thinking in the country.

"We are moving away from an old, conservative idea that Germany is only as good as its industry," he said.

"It's the idea that it is not only economically strong but also cherishes its culture. Germany is a global leader in environmentally friendly technology and that has to mean changes in the way it deals with getting from A to B."