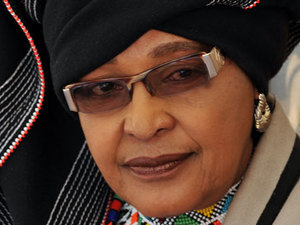 Her voice soaring over the stage, a soprano captures the rebellious, violent passion of Winnie Madikizela-Mandela, in an opera devoted to the former wife of South African icon Nelson Mandela.

"I know I will be demonized and hated in my day, but there is no other way," she proclaims, as the orchestra thunders from the pit. "With our rubber tires and our boxes of matches, we will liberate this land."

Fist raised, standing in army fatigues before a cardboard township, singer Tsakane Maswanganyi rehearses her role ahead of the world premier of "Winnie the Opera", which opens April 28 at the State Theater in Pretoria.

The story begins in 1997, with Madikizela-Mandela testifying before the Truth and Reconciliation, the panel tasked with uncovering political crimes committed during white-minority apartheid rule.

She's under the spotlight for the excesses of her young male entourage, the Mandela United Football Club, blamed for at least 18 deaths in the township of Soweto during the violent end the to the 1980s.

The scene is a snapshot of the life of a woman harassed by the police, banished far from her home, held in solitary and repeatedly tortured, while her husband languished in an apartheid prison.

"Still she stands up and fights for what she believes," said co-producer and librettist Mfundi Vundla.

"That's inspiring. It makes for a great character to explore in any form," he said. "She has elements of Mother Courage, also Carmen."

Her tumultuous life has already turned her into the heroine of a TV-movie on BBC and the Hollywood film "Winnie" starring Jennifer Hudson, currently in post-production.

But composer Bongani Ndodana-Breen says only opera can capture the sheer scale of her life.

"Opera is the language of grand gesture. It can be a nuanced language, but it has grandeur in it," he said.

"Winnie Mandela is iconic, she is the most famous black woman in Africa of the 20th century," he said. "The statements she made, that itself would be lost in a piece of theater. Those powerful incendiary words, which a 65 piece orchestra can just light up."

The idea for the opera was born in 2007, with fellow South African Warren Wilensky, a film producer who also works in Canada.

A few months later, the staged a multimedia show called "The passion of Winnie" at a Toronto festival. Madikizela-Mandela was supposed to attend, but Canada denied her a visa.

The incident won headlines, but critics weren't impressed by their work.

Undaunted, they returned to South Africa, revised their text, and teamed up with Mfundi Vundla, who brought the twin benefits of being a television producer and having an activist background respected by Madikizela-Mandela.

Vundla's support helped win government financing for the project, and a blessing from their muse for the material.

"She never wanted to see anything. She said, 'I want to be surprised on the night'," Wilensky said.

On April 28, the "Mother of the Nation" will be in the audience to hear the song of her life, which still arouses passionate opinions in South Africa.

"It is not about loving or hating her," Wilensky said. "People have misjudged her."

"It was a war. People don't realize that there wasn't a system of justice," he said. "During times of peace, they judge someone who was fighting a war in times of struggle."