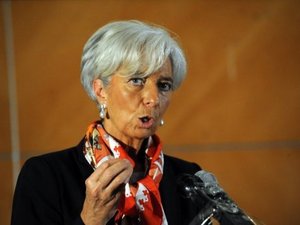 The International Monetary Fund is happy for debt-battered Greece to have an extra two years to bring its runaway deficit in line with the demands of global creditors, its chief said Thursday.

Christine Lagarde told a news conference in Tokyo it would take time before Athens is able to tame its budget overrun to agreed levels, in comments that add weight to the move to push back a deadline to 2016.

"I have said repeatedly that an additional two years was necessary for the country to actually face the fiscal consolidation program."

Greece is going through a painful round of austerity and spending cuts imposed on the country in return for promised loans and debt relief worth a total of about 347 billion euros ($448 billion) since 2010.

The belt-tightening has forced Greece into its fifth year of recession, with its economy forecast to contract by 3.8 percent in 2013.

About one in five people are unemployed in the country, and many of those who still have jobs have seen their pay slashed.

The IMF says Greece's public debt is expected to stand at 170.7 percent of GDP, one of the worst fiscal pictures in the world and a figure expected to rise to nearly 182 percent in 2013.

Greece has agreed with its creditors -- the so-called Troika of the European Union, the European Central Bank and the IMF -- that it will reduce its public deficit to 2.1 percent of GDP by 2014.

It presently stands at more than three times that figure.

A two-year delay would set back Greece's deficit target to 2016.

The IMF has previously said there are some "good arguments" for pushing back the deadline, but Thursday's comments in Tokyo marked the first time Lagarde had been so explicit.

However, allowing Athens more time to get its house in order still leaves the problem of how to fund the overdraft.

At the end of September, Lagarde said Greece was facing a "financing gap", but has so far appeared reluctant for the IMF to further increase what is already the largest loan in its history.

Private creditors, who have already taken a more-than 100 billion euro haircut, are also seen as being unlikely to want to step into the breach.

And politicians from Europe's funding powerhouses face electoral resistance to any move to boost their contributions to supporting Greece via the EU.

Lagarde's comments came shortly after German chancellor Angela Merkel, the head of Europe's paymaster, was vilified in Greece during a visit, with protesters brandishing banners comparing her with a Nazi.

Greece is currently trying to persuade the Troika that it is doing all it can to slash costs by 13.5 billion euros, with a 31.5 billion-euro installment from the bailout package riding on that.

International creditors on Monday gave Athens an October 18 deadline -- the date of the next European Union summit -- to implement reforms in exchange for the next slice of the loan, which has been pending since June.

Greek Premier Antonis Samaras said Friday his country could not take more bitter medicine and warned that if the next aid tranche did not arrive soon, state coffers would be empty by November.

The comments from Lagarde, who was in the Japanese capital for the IMF and World Bank's annual meetings, come after the Washington-based Fund on Tuesday cut its global economic growth estimate for this year and 2013.

"The good news is that the global economy is growing," Lagarde said.

Upon further research and analysis, they should give Greece another 20 years not just two. The same will have to happen to Italy and then Spain and then Ireland and then France and then... You get the idea of what excellent economic shape the West is in. These are smart people. Can't you tell? They are so smart they robbed the coffers and let the poor people pay the money back! The West is the best!