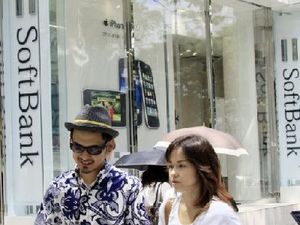 Japanese telecom firm Softbank is mulling a monster deal that would see it buy a majority stake in U.S.-based Sprint Nextel for as much as $23 billion, reports said Thursday.

Public broadcaster NHK said talks had started into a potential takeover of Sprint and pegged any deal's price tag at more than 1.0 trillion yen.

The possible deal was aimed at helping Softbank accelerate its international expansion and cut costs, the Nikkei report said.

The Japanese carrier has entered into large deals before, buying the struggling Japanese arm of Vodafone in 2006 for about 1.75 trillion yen.

Japanese firms have been eyeing overseas deals on the back of a surging yen, which hit record highs on the dollar late last year and remains strong.

For a while, Softbank had been the only Japanese carrier to sell Apple's popular iPhone, which significantly boosted its customer base.

Sprint Nextel has about 56 million customers and booked sales of $8.8 billion in the second quarter.