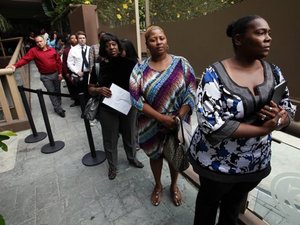 U.S. stocks headed higher early Thursday buoyed by a sharp fall in weekly claims for unemployment, which hit their lowest level in four and a half years.

Opening action focused on Sprint Nextel, whose shares immediately soared 17 percent on a report that Japan's Softbank was planning a bid for the number three U.S. wireless carrier.

Driving the mood was a sharp fall in weekly jobless claims, a measure of the pace of layoffs around the country, to 339,000 in the week to October 6. The last time weekly claims were that low was mid-February 2008, as the country plunged into a 19-month recession that sent the unemployment rate soaring to 10.0 percent.

Media reports in Japan and the United States said Softbank, Japan's third-biggest mobile carrier, was in talks to take over Sprint worth in a deal the Wall Street Journal reported could be worth more than $13 billion.

The deal could buoy Sprint's ability to compete against dominant U.S. cellphone powers Verizon and AT&T as well as the challenge from smaller T-Mobile and MetroPCS, which are in advanced merger talks.