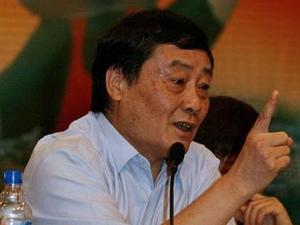 Zong, who heads soft-drink producer Wahaha, has a fortune of $10 billion, according to the magazine's influential annual ranking of China's 400 richest people, helping him win back the position he lost last year.

A similar list released last month by the China-based Hurun Report also crowned Zong as China richest, but put his wealth at $12.6 billion.

Last year's number one on the list, construction equipment magnate Liang Wengen, slid to sixth place with $5.9 billion as his Sany company was hit by weak demand for new building projects caused by a slowdown in China's economy.

Forbes said the number of U.S. dollar billionaires fell to 113 this year from 146 in 2011, while the wealth of China's top 100 richest people fell seven percent to $220 billion.

"This year we encountered a long period of economic difficulty that's rarely been seen in the past decade," editor of Forbes China Zhou Jiangong told a news conference.

"This is a year which saw wealth created by Chinese entrepreneurs shrinking," he said.

Wu Yajun, who runs property giant Longfor, is the country's richest woman, with a fortune of $6.2 billion. She is also one of five property magnates in the top 10, despite government controls on the sector aimed at curbing speculation.

In a country that has the largest online population in the world, it is perhaps not surprising that two Internet billionaires made the top ten.

Robin Li, co-founder of China's top search engine Baidu, held on to second place, despite a slide in his company's stock price, with wealth of $8.1 billion.

And Ma Huateng, the owner of Tencent, which operates popular instant messaging and microblog services, took fourth spot with $6.4 billion.

Wang Jianlin, of property developer Wanda, is at number three with $8 billion.

China's economy recorded annual growth of 7.6 percent in the second quarter this year, its worst performance in three years. The government will next week announce third-quarter performance.

The world's second-largest economy has been rocked by Europe's debt crisis and the weak U.S. recovery, prompting Beijing to cut interest rates and ramp up infrastructure spending to spur growth.